Most people dismiss toilet gurgling, but it could indicate that your plumbing is about to fail. You must deal with it like you would any other symptom before it gets out of hand. So, what’s the deal with your toilet bubbling? You might remember certain scary movies when a monster is trying to get out of the sewer. In the vast majority of situations, toilet gurgling is caused by minor concerns that we will discuss shortly.

When it comes to toilet troubles, consulting a plumber is the best option. However, it isn’t a bad idea to try some home remedies. At the very least, it will save you the cost of hiring a plumber. Exploring some of the suggestions we’ll be covering will help you get rid of the stinky gurgles, especially if you don’t have access to a plumber.

What Causes a Toilet to Gurgle?

A clogged line is the source of your toilet’s gurgling. A blockage generates negative air pressure, which generates the gurgling sound. Instead of air flowing through the lines, the air pushes back. You may also notice a bubble in the toilet water. This occurs when:

We’ll look at the causes of toilet gurgling in this piece. We’ll also go through which problems you can solve yourself, which ones you’ll need to hire a pro to handle, and which ones may not be your responsibility at all. 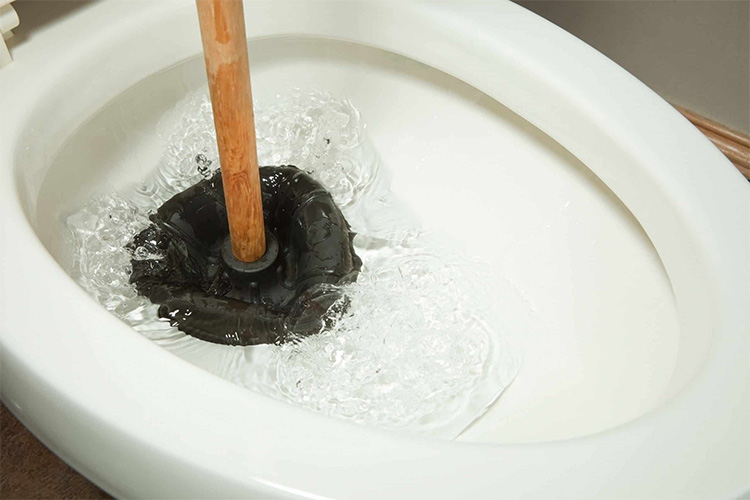 The most basic issue is a clogged toilet. You’ll hear a gurgling sound when the air is pushed back. As a result, this is a perfect place to start. This is especially true if there isn’t a problem elsewhere in the house. Hopefully, you will be able to resolve this issue on your own.

Give it a good ten or fifteen plunges. This should dislodge the blockage if it’s close to the surface.

If it doesn’t work, if you have one and are handy, try a snake or auger. A good auger can cost up to $300, so compare that to the cost of hiring a plumber. Then it’s time to enlist the help of a professional.

The vertical pipe leading to your roof is known as the vent stack. It aids in the regulation of your plumbing’s air pressure as well as the release of exhaust gas. However, it is intended to be an open channel at all times — even water does not flow through them. When it’s blocked, you’ll feel the negative pressure once more. You might also notice slow draining or a stinky, gassy sewer stench around the house.

Leaves or animal nests are common culprits. It’s occasionally a mouse or a little carcass. Whatever the case may be, you must remove it. And it’s usually not something you can do on your own.

First and foremost, you must climb to the roof. Take a careful look if you’re OK with it. Hopefully, there’s just a nest or clog near the vent’s top that you can remove.

We could then discuss snaking the line. However, you’re better off calling in a pro at that point.

You won’t be able to fix your toilet if it’s gurgling owing to a water main problem. It may, however, be the obligation of your municipality rather than yours.

The physics are the same here: The pipe has become clogged. Negative pressure forces air to flow back through the channel it came through. This results in gurgles. Perhaps bubbles. The difference lies in the location of the obstruction.

In this instance, you might notice some more indications around the house. Other drains, for example, may become clogged. Alternatively, you may flush and notice water coming back up in the shower.

In these circumstances, the barrier is too far away for any consumer tools to reach. You’ll require the services of an expert. But, before we go any farther, let’s draw a distinction.

The following are the differences between a drain line and a mainline: Drain lines are the pipes that various fixtures in your home utilize to drain water outside. The mainline transports all of that wastewater to the municipal connection.

It’s crucial to make the distinction for a few reasons.

To begin with, a mainline blockage is more difficult to locate – and thus more costly to repair. Second, they need greater effort. Getting to it often necessitates excavating outside your home.

It’s most likely the mainline clog if it affects the entire house. Another indicator is if your toilet gurgles somewhere else in the house because the downstairs is clogged.

Meanwhile, a clogged drain line on the second floor affects only that region. When it comes to a first-floor drain pipe, if the upstairs is fine, it’s most likely not the mainline.

In any instance, you’ll require the services of a professional. We send a camera down the mainline to locate the blockage. We’ll probably take out a toilet and go that way with a drain line.

A clogged municipal sewer line is the last cause for a toilet gurgling, though you’re undoubtedly experiencing other issues at this time. The difference is that it is your town’s obligation, not yours, to remedy this. This is the pipe that transports the garbage away from the residence. This is where your mainline dumps. The lines from other houses do as well.

So, if you think it’s the municipal line, check with your neighbors to see if they’re having similar issues. If this is the case, contact your township, borough, or water supplier.

You should be able to remedy basic issues that cause toilet bubbling using the information we’ve provided. We’re delighted to save you the time and money that you could have spent elsewhere. If the problem persists after you’ve fixed it, we recommend calling a plumber.