How far apart are studs? This is an important question to ask if you are attempting to hang a picture on your wall or secure some fasteners to the wall studs. 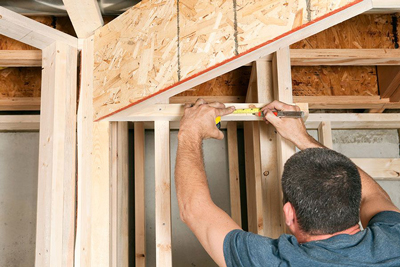 Sixteen-inch on center denotes a distance of exactly 16 inches from the center of one stud’s narrow (nominal 2-inch) side to the center of the next stud. Standard two-by-four studs are around 1 1/2 inches by 3 1/2 inches in size.

Interior walls with studs set 24 inches on center, 12 inches on center, or anything in between are prevalent in older homes. Stud spacing was less important in older homes since the walls were commonly coated in lath and plaster, so the framing did not have to conform to a 4-by-8-foot panel. Today, stud placement is strictly restricted by construction rules, based on what the walls are supporting.

Exterior and some interior walls are load-bearing, which means they support the roof and ceiling above, as well as the upper levels in multilevel constructions. All load-bearing walls normally have wall stud spacing of 16 inches on center.

To provide backing for wall panels, some external walls include three studs at each end, or a combination of one extra stud plus lumber blocking. The additional studs or blocking have no effect on the 16-inch on center layout.

4. Laying Out a Stud Wall 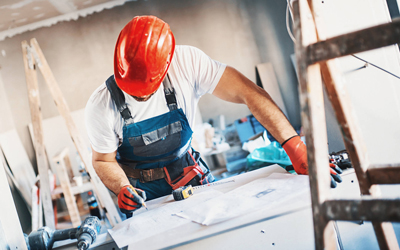 The first two studs on a wall aren’t normally placed at 16 inches on center; instead, their centers are only 15 1/4 inches apart, allowing the drywall or other panel material to cover the entire 1 1/2-inch edge of the first stud. The remaining studs are 16 inches apart, and each panel comes to a halt, or “breaks,” at the center of the stud.

Using a tape measure, square, and pencil, mark out the stud placements. Stretch your tape measure out to 15 1/4 inches, starting at the left end of the wall plate, and make a note. Then, using your square, draw a pencil line across the plate’s top (3 1/2-inch side). Finally, make an “X” on the right side of the line to indicate where the stud will go—the stud will cover the X.

Move the tape measure’s end to the first stud line, then mark the other studs at 16-inch intervals, drawing a line for each and marking with an X to the right of each line as before. The final stud distance will most likely be less than 16 inches, which is alright.

Why Homeowners Should Locate Their Wall Studs

Whether you’re hanging floating shelves in the corner of your bedroom or a modern art piece in your dining room, it’s critical to attach these pieces to a stud. Without the security of a wall stud, your fasteners may pull out of the wall, destroying your property, the object, and possibly injuring you.

The Value of Wall Studs

You’ve probably never given your wall studs this much thought before. But now that you know how to find your studs, you won’t have to waste time hammering holes in your walls. With the correct stud finder, you can easily determine how far apart the studs in your home are.